New photos of the Prince were released to mark his second birthday tomorrow, and the Prince is clearly having fun with paint! They were taken by the Duchess of Cambridge earlier this month. Louis getting into the fingerpainting. It’s believed the rainbow theme ties in with the rainbows being made by children as a sign of hope amid the coronavirus crisis, and to honor the NHS. Below, the Prince’s rainbow-colored handprint. UPDATE APRIL 23: For everyone wondering about Prince Louis getting paint on his face while working with the fingerpaints, here you go. Kensington Palace released a cute side-by-side titled “Instagram vs. Reality” on Twitter. And here is the new photo by itself. Also today, Clarence House released a photo of Prince Louis with his grandfather.  The Duchess also took this photo. 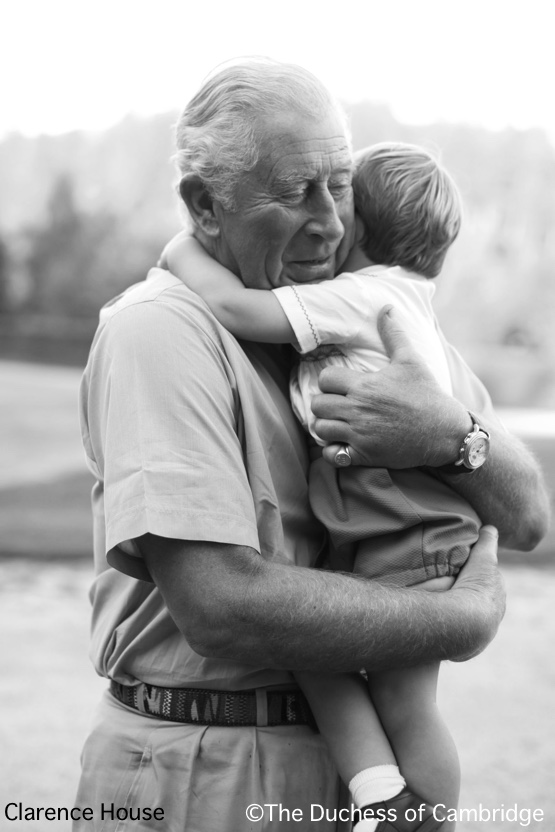 These are really a treat to see this afternoon. Here you see all three Cambridge children in their official second birthday pictures.

In the past year, we saw Prince Louis much more than we did in his first year.  In May, the Prince, along with his big brother and sister, had a sneak peek of the Back to Nature Garden at the Chelsea Flower Show. The garden was co-designed by the Duchess of Cambridge as part of a project designed to get families and children outdoors. Just a few weeks after that, it was time for the Prince’s first Trooping the Colour. Here he is with Princess Charlotte as they watch the goings-on ahead of the flypast. He then joined the rest of the family on the iconic Buckingham Palace balcony. And seemed very engaged through all the noise and excitement. Another view and a funny face from HRH. It wasn’t long before we saw the Prince again, this time at a polo match in July. A few weeks later, another image from the match was released on Twitter in honor of Prince George’s birthday. In December, we saw a black and white photo of the Prince and his siblings and father that was also taken by the Duchess. It was used for the family Christmas card. December also brought pictures of the Prince as the family headed to The Queen’s annual Christmas luncheon. Most recently, Prince Louis was seen with his brother and sister as they participated in the first “Clap for Our Carers” event in March.  (Note the shirt Louis is wearing beneath his sweater.) UPDATE: It looks like the shirt Prince Louis wore could be from Sainsbury’s, a large chain in the UK where Kate has been seen shopping with the children.  It is somewhat similar to a Target or Walmart. The top is from the retailer’s own brand, Tu Clothing. Below, products from the Tu Baby collection.

The Telegraph reported in 2015 that “Sainsbury’s Tu brand is the UK’s seventh biggest clothing retailer by volume” in the UK. Sainsbury’s notes on its site that “Tu, our exclusive clothing range, takes inspiration from both ready-to-wear runway and everyday street style to create unique pieces. In 2016 we introduced our Tu Premium collection, available in over 190 stores and online. The collection features higher quality fabrics, offering our customers luxe looks for less.”

The top that Louis might be wearing is from a Tu set, the Navy Dungarees and Check Bodysuit (£12, about $15 at today’s exchange rates). As several have pointed out it looks like this could be the shirt the Prince is wearing beneath his sweater in the Clap for Our Carers video. The bodysuit is 100% cotton with long sleeves, snaps at the crotch, and one front pocket. The dungarees are cotton with a touch of elastane for stretch and both are machine washable. The set is still available as of this writing, but the company only delivers to mainland UK and Northern Ireland addresses (except the Scottish Highlands). Our thanks to Lisa on the Facebook page and Kate’s Closet for the ID on this one!

Here is video of the Prince’s last year via the Royal Family Channel.

One thought on “It’s a Rainbow of Color for Prince Louis’s Second Birthday! (Updated with More photos and ID)”