Home » Charlotte » How to Make Princess Charlotte’s Dresses Yourself

Hello and happy August to everyone. We are back with our post on making your own Charlotte-style dresses, or having them made by a seamstress.

But first, a couple of tidbits, beginning with news about the site. We are in the process of moving to a new hosting company and also updating the blog’s overall look. Hopefully you won’t notice a thing, with the possible exception of some cosmetic improvements. But if you encounter any difficulty viewing the page or getting new posts via email, please let me know (Susan @ WhatKateWore.com). Now to the latest news on ID’s for the wee Royal’s dresses: sadly, the news is that there is no news. After poring through umpteen websites and contacting many retailers I have come up empty handed. (Insert very sad face here.) Above, Charlotte in Canada wearing two frocks that remain UFOs.

Many of you have sent in terrific ID suggestions about who might have made Charlotte’s dresses or George’s shorts worn in Poland and Germany. Thank you for your comments here, as well as on Facebook and via email, the ideas are all helpful. Below, a few of the possibilities for the shorts Prince George wore in Poland and Germany that Alyssa shared in a comment (from L to R): Rachel Riley’s Tailored Boys Shorts, the Amaia Kids Gull Shorts, Pepa & Co Baby Boy Cotton Shorts, and Pepa & Co Boys Cotton Shorts. All of these would be solid stand-ins for what George wore.

As we have previously discussed here and on Facebook, it really does seem likely that Kate is having Charlotte’s dresses made by a private seamstress. There’s also the possibility some of George’s clothing is being made by a tailor; Prince William mentioned tailoring George’s clothing in the documentary Diana, Our Mother: Her Life and Legacy. But today we’re focusing primarily on Princess Charlotte’s dresses.

The private seamstress hypothesis is the subject of a piece in Hello! titled Is Kate getting Charlotte’s clothes made?

Royal fans have, however, been having a hard time identifying the little Princess’s clothing of late. Landing in Warsaw earlier this week with Kate, Prince William and her brother George, Charlotte was snapped wearing a pretty Liberty-print dress and red Mary Janes. The internet sighed a collective ‘aww’, but nobody was able to discover the designer of Charlotte’s dress! The royal is also potentially dressing Charlotte in hand-me-downs.

Another possible reason is that Charlotte is wearing bespoke clothing – perhaps Kate is buying the material and taking it to seamstresses to create her gorgeous little looks.

Many of you raised the possibility over the last six months that Charlotte could be wearing dresses Kate and/or Pippa wore as little girls; it is a possibility.

Several comments and emails suggested a post on creating your own Charlotte-style dresses. Let’s start with an overview examining the common design elements on almost all of Charlotte’s frocks: a smocked bodice, puffed sleeves and full skirt. Most of the dresses button up the back and have buttons on the waistband. The sleeves often feature additional detailing at the hem/cuff, as opposed to simply being hemmed.

Of course, the most noticeable element is the fabric. Kate favors small floral prints; lately we are seeing pastels replaced by bright, vibrant prints.

Most bear the signature Liberty of London look, small floral prints on cotton fabric. Liberty makes fabrics in a plethora of other motifs, including many influenced by Art Nouveau and Arts & Crafts themes. The textiles are offered in silk, corduroy, wool, knits and and other weaves, but Charlotte’s all appear to be the company’s Tana Lawn, a finely woven cotton finished without allergens. Liberty’s textiles are used for clothing, personal fashion accessories, and interior design.

Fabric may be purchased directly from Liberty; it is also available at other outlets. In the US it can be ordered online from retailers like Fabric.com, DuckaDilly, B & J Fabric and Amazon. Prices range from $20 – $35 per yard; occasionally you can find good deals on etsy or eBay.

Next, the hunt for a sewing pattern.  Below left, a contemporary pattern from Butterick at Walmart ($7.05) features a dress with a Peter Pan collar, puffed sleeves and full skirt. On the right, a vintage Simplicity pattern (no longer available from the site where I discovered it) with a smocked bodice and ruffle at the neck or point collar, puffed sleeves and back sash. Using search terms like “classic girls dress pattern” or “vintage patterns toddler girl” on sites like etsy and eBay provides lots of results. If buying vintage, you might be able to find “new, uncut condition” or “unused.” If the pattern has been used be sure to verify all of the pattern pieces are included. Many of the larger pattern companies are selling updated versions of their classic designs. Below, Simplicity 8062 ($10.25 at Amazon), a current pattern that features 1950s designs. If you do decide to purchase contemporary patterns, be sure to keep an eye on the pattern sales at Joann and other large retailers. There are frequent discounts bringing the price down to less than $5.

UPDATE 1 Friday, Aug 11: My friend Stacy knows her smocking and her sewing, and she emailed to suggest the ‘Lee’ pattern from Children’s Corner ($16). It is a good one, offering almost all of the design elements seen in Charlotte’s dresses. Others concur with Stacy in their praise of the pattern. UPDATE 2 Friday, Aug 11: In a comment on the post, Barbara recommends looking for vintage patterns by children’s clothing designer Kitty Benton, created in partnership with McCalls. The patterns can be found on etsy, as well as Amazon and other online marketplaces. If you look closely at the lower left corner of McCalls 4508 you’ll see that it includes “easy smocking lesson for beginners”. 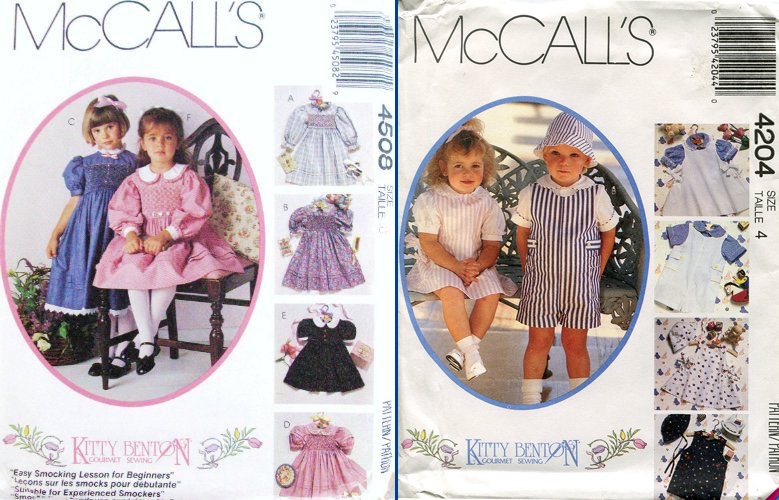 Barbara also recommends a book by Ms. Benton, Sewing Classic Clothes for Children. It was published in 1981 and is out of print, but you can find copies online at Amazon and other book dealers. 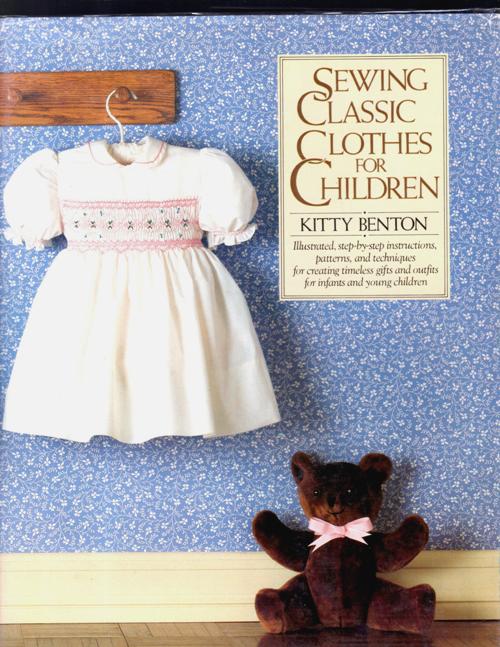 UPDATE: In a comment, Jenny suggests Simplicity Pattern # 1205 as a good resource, and Stacy recommends Michie’ #131, available at Farmhouse Fabrics.

Now we come to the topic of smocking; not everyone is fond of Prince George’s smocked clothing, but there is much less resistance to Charlotte wearing smocked pieces. (There is an entirely separate post on this hotly debated subject that is *almost* finished; we should have it published within a few weeks.)

Many of Charlotte’s dresses are smocked. Here is a closer look at the embroidery done on top of the pleated fabric.

On the WKKW Facebook page Pamela shared that many in the smocking community believe Charlotte’s dresses exhibit features more in line with Spanish smocking than British smocking. Here is a bit from Pamela’s comment: “British smocked dresses tend to be smocked much more deeply from a high yoke to the waist. I haven’t seen a photo of Charlotte in what I would identify as a British smock yet.”

If interested in making a smocked dress, there are contemporary and vintage patterns. Below left, a contemporary pattern that you download from etsy ($25) for the dress and smocking pattern. On the right a pattern just for the embroidery, or smocking design (also called a smocking plate) from Creative Sewing and Smocking ($4.50). There are also books with design plates, like this Children’s Corner offering ($66), as well as CDs; the image on the right is for a CD of smocking plates from Punch with Judy. In her Facebook comment Pamela explained that some of the patterns shown may be for machine smocked designs, not for pieces smocked by hand.

There are also some great guides and tutorials online; I would do a search for “smocking tutorials” or “smocking guides.”  A few I discovered: Maggie B. Smocks has several, all accompanied by great photos; Smocking Books has lots of good information on their site; as you might expect, there are quite a few videos with information and tips.

The final step: finding a good seamstress, unless you are comfortable making the dresses yourself. Here are some options:

UPDATE 3: After the post was published we received all sorts of good info and tips. One of the best comes from Judy, who was kind enough to share on the WKKW Facebook page some of the things she has made. Here is a look at Princess Charlotte side by side with a dress Judy created. Judy noted in her post that the pattern she used did not have a collar or waistband so she made her own; she also added her own piping to the Peter Pan collar and waistband. Below left, another fab frock Judy made, this one incorporating a ruffled collar. On the right, yet another dress, this one shown from the back. A big Tip of the Tiara to Judy for her design and seamstress skills and her generosity in allowing us to share her work.

Traditional retailers offer plenty of ways to ‘repli-Charlotte” and we’ll look at the many outlets offering similar styles in our next post. Below, details of the Princess’s Pepa and Co dress worn to children’s party in Canada. The dress showcased a handsmocked bodice, collar and sleeve cuffs. This link is to the current iteration of the dress.

We’ll leave you with a look at Charlotte in her smocked dress. « A New Birthday Photo as Prince George is Four!
George is Dapper for First Day of School UPDATED: Shoe Info »

34 thoughts on “How to Make Princess Charlotte’s Dresses Yourself”