The Cambridge family was color-coordinated once again as they left Poland and flew to Germany. The Duke and Duchess, along with Prince George and Princess Charlotte, arrived in Berlin midday, likely one of the more elegant groups out on the runway in some time. But it wasn’t a walk in the park, especially for the Princess; she was *very* busy. More from The Telegraph:

While her two-year-old peers are busy playing at nursery or getting to grip with their Play-Doh, Princess Charlotte is already beginning to master the art of international diplomacy.

The Princess put on a show worthy of her great-grandmother the Queen today, bobbing into a curtsy, shaking hands with a defence attaché and graciously accepting a miniature bouquet of flowers.

If you look closely, you can see the gentleman on the left ‘shaking hands’ with the Princess after she receives her flowers. It was the first time she was presented with her own official posy. George wasn’t as excited by the activity. It looked like the bright sunlight was bothering him, and it’s also possible the warmer temps were uncomfortable.

Princess Charlotte was allowed to toddle along the red carpet on her tiptoes, appearing to emulate her mother, the Duchess of Cambridge, in high heels. 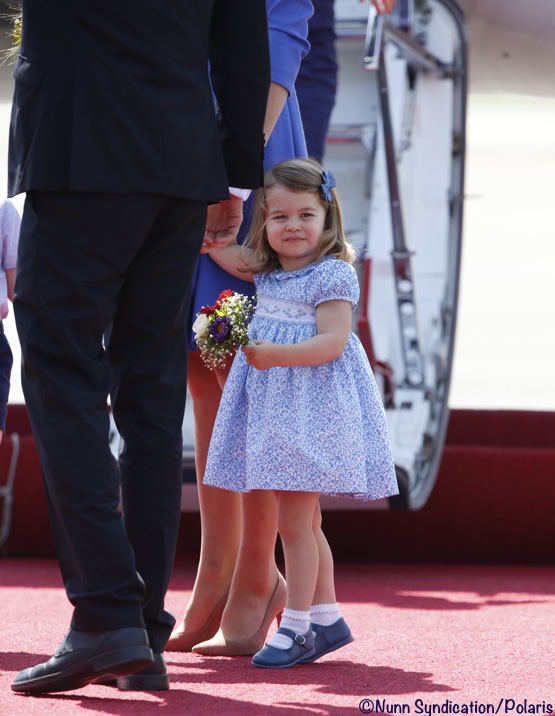 And then there was The Curtsy. From Vogue’s coverage:

But then, something happened that everyone around her apparently missed. After Kate Middleton had reportedly asked Princess Charlotte to say thank you, the Duchess of Cambridge and others in attendance momentarily looked away.  It was then that the littlest royal dropped into an adorable and tiny curtsy. Lucky for Princess Charlotte, despite the fact that her mother and others did not catch her action, the World Wide Web was watching.

Here is a spot of video.

Now for what the Cambridge children wore today. We begin with the Princess’s pretty blue and white dress. Like almost all of her other dresses, it has a smocked bodice, puffed sleeves, ruffled collar, back buttons and a full skirt. These images better show the fabric, a floral print in different shades of blue. Here is a look at the smocking, with its hint of green and what appears to be a tiny floral motif, best seen below right.

Meg left a comment asking a very good question: does Charlotte have bloomers she wears with her dresses? The answer is yes, she does have them, they are always of matching fabric. As always, we’ll continue searching for the dressmaker, but my sense continues to grow that all of these frocks are being made by a seamstress just for Charlotte.

The Princess wore another pair of Doña Carmen shoes, the Mercedita Hard Sole in royal blue. Made in Spain, the shoes are leather with an anti-skid rubber sole. They are €29.95, roughly $35 at today’s exchange rates.

And we saw one of Charlotte’s signature hair bows by Amaia Kids; it looks like the color is…all together now, royal blue. (Insert grin here.) Now to what Prince George wore, starting with his ‘Chickadee’ shirt from family favorite Amaia Kids. The shirt is a basic button-front in a light blue and white stripe, with a collar similar to that seen on a polo shirt, finished with mother of pearl buttons. The piece is on sale for £20, discounted from £40. Our thanks to Prince George Pieces for their ID on this. Prince George was in the same shorts seen when the family arrived in Warsaw on Monday (shown below). They are a classic style featuring a zip front, front pockets and two back besom pockets, and belt loops. The schedule has been so busy I’ve not had much time to look; hopefully tomorrow I’ll find some breathing room and have another chance to search for the shorts. (She says optimistically.) George is wearing a belt by Vaello, another Spanish brand. We know this only because of one of our favorite WKKW ID experts, Bojanana on Twitter.  This morning I tried and tried to decipher the logo on the Prince’s belt buckle. I finally figured out I had it upside down (l). Correcting that didn’t really help (r).

Recognizing I wasn’t getting anywhere, I decided to impose on someone far more skilled at this than I, Bojanana. Sure enough, within 90 minutes she had the company name and links to the likely belt. It is by Vaello, and it looks like HRH wore the brand’s azul marino, or navy blue. We show it at Peques Infantil, where it is €11.90, about $14. The brand is sold on Amazon Spain. Today’s Tip of the Tiara definitely goes to Bojanana!

George returned to his Start-rite ‘John’ lace-up leather shoes. The shoe is a very good buy right now, reduced from £65 or £59 to £17.

And with that, we’ll see you tomorrow over at WKW and back here on Friday.