The event was at Government House, where the Cambridge family is staying during the Canada tour. And while George and Charlotte were guests of honor, they were joined by children and families of Canadian military personnel on active duty. For many royal family followers it was the most anticipated event on the entire itinerary for the Canada tour. It did not disappoint. It is Charlotte’s first formal engagement. (Being on the balcony for Trooping the Colour or at the airport Saturday do not count as ‘engagements, per se.) More about the party from The Telegraph:

After making an entrance as a family of four down the steps, the Prince and Princess’ small faces lit up as they saw the treats ahead of them, including puppets, bubbles and a petting zoo starring a Nubian goat and miniature ponies named Honey and TC. This is Charlotte and “Moose,” one of several dogs at the party.

More from Richard Palmer’s story in The Express:

As soon as she let Charlotte down, the little Princess went running off towards some balloons, shouting: “Pop.” “Would you like a balloon, Charlotte?” William asked. William and Kate were paralysed with laughter when Charlotte tried to lift up the whole balloon archway to the petting zoo. She was stopped from causing further mayhem. It’s tough to tell if George was dissuading Charlotte, or helping her lift up the arch. I thought it was the former but after watching this video it may have been the latter.

Princess Charlotte and Prince George attended a party for the children of Canadian military personnel https://t.co/IGNbVUrnmt

But Charlotte also liked the bunny, and the bunny-handler. George was working on his bubble blowing. He looked quite intense. The children were in familiar brands along with a few new labels, we’ll start with what Charlotte wore. She was in a piece by Pepa and Company, the Hand Smocked Dress in blue and coral (£74, about $85). 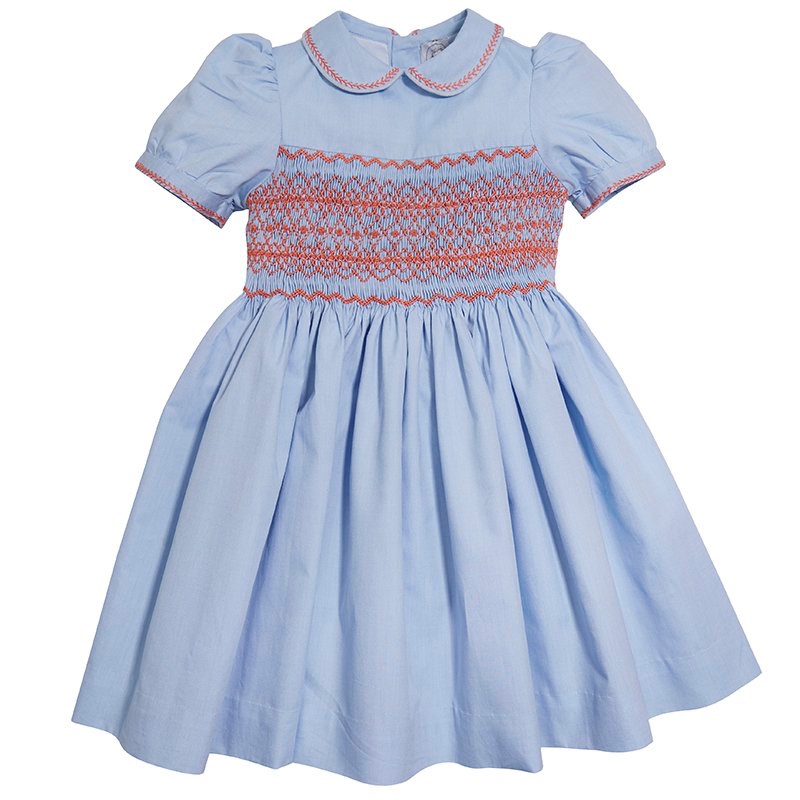 It is another classic style in 100% cotton, with a Peter Pan collar, back sash, and puffed sleeves. The bodice is hand-smocked, as are the sleeve hems and collar. The dress comes with matching bloomers.

Our thanks to Monique Jessen at People and HRH George Pieces for their ID work on the dress. Charlotte had on a sweater we have seen before….because her big brother wore it first. Monique Jessen of People has the story:

Like mom, like daughter! Princess Charlotte has pulled off the cutest royal re-wear yet. Carrying out her first official engagement at a very special playdate with military families in Victoria, Canada, on Thursday (and speaking her first public words!), the nearly 17-month-old royal wore a blue cotton dress with coral hand-smocking from Pepa & Co. But the real surprise was her sweet blue cardigan: the very same one from Amaia that her 3-year-old big brother Prince George wore to meet her at the hospital in 2015.

There are a few photos from the party that show the tag inside the sweater which says “Mi Lucero,” that is the name of the company that makes Amaia Kids sweater.(The graphic above shows the incorrect color of blue, we do not have a good image of the sweater in the blue that George, and now Charlotte, have worn.) It looks like Charlotte’s socks are the Plain Sock with Cuff Detail, we show them at Classical Child ($8 NZ, about $6 USD).

The Princess was in the same UFO shoes seen on Saturday, and she wore one of her blue Amaia Kids hair bows. This is a little video that is cute, watch for George to come into the frame from the right at about :07

#PrinceGeorge doesn’t want to miss out on anything #PrincessCharlotte is getting! “But I want one, can I have one?” #RoyalVisitCanada pic.twitter.com/wCM1kgs2dN

George wore a Neck and Neck Boys Checked Shirt in blue and wine plaid ($49.99). The piece is 100% cotton, in a classic button-down style. This shows the whole shirt. Our thanks to Pauline for her ID on this piece! Atop the shirt the Prince wore a sweater by Wild and Gorgeous, the Harry style in larkspur blue. The sweater is 100% merino wool, with tipping at the collar and cuff, and a front button placket ($84.50) The brand describes itself as offering clothes for “gorgeous girls and wild boys.” Many thanks to Rebecca English of The Daily Mail for the tip on this item. UPDATE OCT 5: We can now confirm that George was wearing shorts from Doña Carmen, the same shop where Charlotte’s shoes were purchased. The Prince was in the retailer’s Pantaloon Tenesis style, in the ‘Granate’ color. The shorts are 100% cotton and they are priced at €17.94, that’s about $20/£16. The retailer also offers the short in navy and in camel.

UPDATE SEP 30: George wore the Barnie Loafer from Papouelli Shoes. A leather version of the company’s popular moccasins, the shoe has a bubble sole. The Barnie is priced at £55, that’s roughly $70.

Papouelli Shoes says George also wore a pair of their knee socks, I will update as soon as I verify the correct color. The Telegraph’s fashion columnist, Emma Spedding, shared thoughts about what the children wore in a column today:

Once again the infants looked like they’d stepped straight out of the pages of Mary Poppins, dressed in their now signature bygone era classic childrenswear. ..there’s no doubt that the timeless aesthetic which these brand tap suits the needs of the royal family for public appearences, giving George and Charlotte a  similar look to that once worn by their father, grandfather and great-grandmother.

We’ll leave you with this picture, it captured a sweet father-son moment. Here is our graphic representation of what Princess Charlotte wore. And for what Prince George wore.