We are back with a post sooner than anticipated (and happily so!) because of the evening’s events at Kensington Palace, where George’s parents and his Uncle Harry were having company for dinner. George wanted to stay up past his bedtime, so an exception was made; you can just see him inside waiting for the guests to arrive. It was George’s understanding the dress code was business casual. After being introduced to the President and First Lady he showed them how much he liked the rocking horse they gave him when he was born. More from Gordon Rayner’s story in The Telegraph:

Prince George took on the biggest diplomatic challenge of his young life last night when he was allowed to stay up late to meet the leader of the free world. Here is the stuffed animal the Obamas sent George when Charlotte was born. It is actually a toy version of Bo, the family’s Portuguese water dog. The toy is called “Bo the First Dog,” and it’s available at multiple outlets, we show it at Amazon. “George stayed up for a few minutes when the President and the First Lady arrived, but Charlotte was in bed.” (George had previously been playing with a plush version of First Dog Bo, a past gift from the Obamas.)

While writing about the Kensington Palace dinner on our sister site I started receiving messages and email from readers wondering where they could buy a robe like George’s. A lot of messages. On to what George wore when the President came for dinner. You can see the size of the checks matches George, and the buttons are on the left side with buttonholes on the right, as they are on George’s set. Many thanks to Kate for letting us know about the auction, it is wonderful to have this ID resolved.

UPDATE Sat. a.m.: There’s good news for those interested in buying the robe: it is being restocked and can now be pre-ordered. A Tip of the Tiara to A Petite Princess for ID on this. Monique Jessen from People confirmed the ID and has a reaction from the company.

Daniel Price, founder of the online retailer tells PEOPLE exclusively, adding: “Our website has gone crazy ever since the photo was released!”

And guess who else has a personalized robe? Back to the People story:

And don’t fret, while Princess Charlotte may have missed out on meeting her parent’s influential guests (she was already tucked away in bed by the time the Obamas arrived at Kensington Palace for dinner with Prince William Princess Kate and Prince Harry) she has her very own bathrobe from the company, bearing her name like George’s but in pink gingham trim Monique has also identified George’s slippers, they are from Trotters. The Little Boston Plane slippers are an item from last season, sadly they’re no longer available.

If interested in a robe that is similar to Prince George’s here are some options. Here is a quick list of retailers currently offering the style, or a similar piece. Below we show it at WithCongratulations.co.uk, where it sells for £16. Harlequin Designs in the UK offers it through their Amazon store. It appears Daphne’s Details also offers the robes, although a request for photos providing a closer look at details might be in order if considering Daphne’s. (Only because I can’t see from the photos if the trim is the same, or similar gingham.) 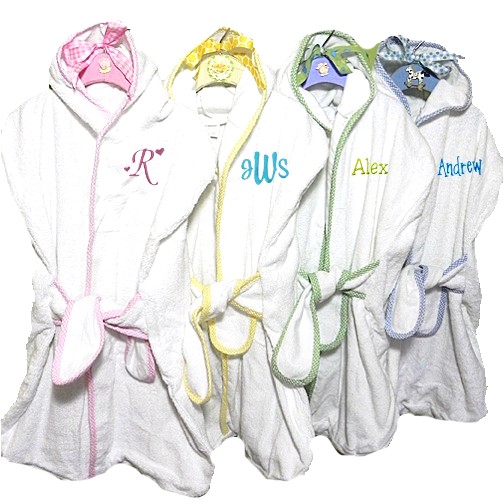 Another option for a bath sack, Initial Impressions. As an FYI, I have had no dealings with any of these retailers offering personalized robes. If comfortable with something from a major retailer that is not personalized, Dillard’s offers a blue and white gingham trimmed robe. Let us know if you have any other resources we should share, I’m happy to do that.

« Charlotte on the Queen’s Lap, George on Best Behavior in Historic Photo UPDATED
4 Photos Released of Princess Charlotte on Eve of 1st Birthday »